Friday November 2, 9 & 16, 2012, 6:00-7:30 pm. Room 237E, St. James Campus, 200 King St. East
Over the course of a 3-session workshop, Ava Homa discusses crafting a piece of fiction: “How to create characters who breathe on the page,” “The art of writing dialogue,” “Plot is the thing: Suspense and conflict,” “Point of View” and “Setting.”
Short stories are distributed to the participants prior to the beginning of the workshop. During each session, participants are encouraged to read the text and analyze one element mainly. After that, members will be asked to read their own work out loud and get constructive feedback from peers. This way the workshops help the writers build skills from session to session.
For more information about the Pen Lecturer-in-Residence please visitwww.AvaHoma.com
Office Hours: Ava Homa is available for individual meetings every Friday between 3-6 pm. By appointment only.
Posted by Unknown at 1:16 PM No comments:

Posted by Unknown at 8:41 AM No comments: 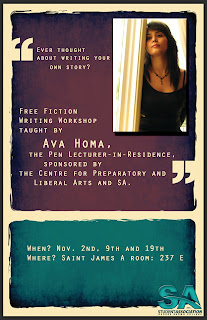 Office Hours: Ava Homa is available for individual meetings every Friday between 3-6 pm.. By appointment only.
THE LINK
Posted by Unknown at 8:37 AM No comments:

Powerful, suggestive, subtle, and sensual, Rhino Season was screened, for the first time, at the 2012 Toronto International Film Festival. The movie is devoted to the recent Kurds killed by the government of Iran: Farzad Kamangar, the Kurdish teacher, who was executed on May 2010, his crime being “animosity with God” and “threat to national security,” none ever proved. The second person the movie was devoted to was Sane Jaleh, the young Kurdish student who was killed during the Iranian’s protest to the rigged presidential election of 2009. Ghobadi also devotes the work to all the other political prisoners in the notorious prisons of Iran.
Despite the predominance of poetry and passion in this movie, suffocation is, at times, overpowering. Walls, narrow brick staircases, prison, handcuffs and the ugly face of lust are present. Love and humanity, nevertheless, continue to flourish among the dirt and debris.  The change of the regime in Iran plays a significant role in the dramatic shift in a life that Iranians try to hang on to desperately. The desperation is present, betrayal and injustice, torture, rape and exile are the motifs.

The protagonist, Sahel Farzaneh, is a poet who has no dialogues in the movie and only speaks through his poetry. This character is based on an unknown Kurdish Poet that Ghobadi only introduces as Mr. Kamangar. This man still lives in Kurdistan. Ghobadi’s uncle was killed by the government of Iran. This unknown man was incarcerated for decades by the government of Iran because of his work despite the fact that his poetry wasn’t political. Ghobadi refused to reveal the poet’s identity to save him further trouble. Ghobadi says he tried to get close to the poet and when he was on the set, he decided to act like a poet. The story and the dialogue took place on the set and he tried to stay loyal to the poetic cinema.
Water seems to claim a considerable portion of the movie through appearing as sea, rain, snow. In a scene, the audience only hears the waves of the sea and the sound of the seagulls while Sahel, the protagonist, who is inundated by pain, only stares at the waves and a piece of his poetry is recited. This powerfully evocative movie conveys the truth more through image and the character’s gesture than through conversations.

In one of the close ups, an eye of a horse is at the centre of the screen, facing an eye of a human being, of Sahel, the Kurdish poet from Baneh. Mental and emotional earthquakes are visualized in Rhino Season.
Ghobadi is economic in dialogues: except the nonsense of a female pimp, conversation is rare. Calligraphy is present and the words the poet tattoos on his back make for a powerful end to the movie.
Toronto Star in its review of Rhino Season writes that: “The imagery is stark and stylized while the colours are bleached creating a washed look filled with brown and blues. There is hardly any dialogue so it is left mainly to the pictures to tell the story and in the case of the actors they have to convey their emotions through their gestures, facial expressions and eyes; even with the limitations placed upon him, the performance of Behrouz Vossoughi is haunting… What did leave a lasting impression were the dream-induced visuals which are both beautiful and disturbing.”

Animals are present in this movie, including turtles and horses reminding the audience of Turtles Can Fly and A Time for Drunken Horses, Ghobadi’s previous movies. This makes this director’s fourth title with animals. Nobody Knows about Persian Cats was his previous movie. “I love animals” Ghobadi says. “But all I did was to visualize Kamangar’s poetry. He loves animals as much as I do.”
This is the first time Ghobadi is using professional actors. For his other movies, Ghobadi, relied on local people. In an interview Ghobadi briefly refers to the difficulties of working with the ordinary people such as a man who tells him “Your movie is only two hours. I have already worked more than five hours and I won’t be back tomorrow.” Having people, as opposed to actors, in Ghobadi’s movies builds priceless credibility and contrasts them to the shiny Hollywood movies. This choice makes movie marking harder for Ghobadi, but proves this Kurdish man’s creativity. When asked how come he decided to invite professionals, Ghobadi answered that it was all due to the respect he has for Vosooghi. Ghobadi mentioned the Vosooghi was his childhood hero, the man whom he’d passionately watch on the screen of a small cinema in Baneh of Kurdistan, a man who’d render Ghobadi sleepless when he was beaten by the bad guys in the movies.

The movie is haunting and dreamlike. Greg Klymkiw in his review of the Rhino Season states that: “The picture is, quite simply, dazzling - an original voice that yields a deeply moving, artistically daring and consummate demonstration of how cinema can work at the highest levels of the medium. In the case of Rhino Season, the medium is simply not the message, nor the message it conveys, but how the medium is pushed over the usually accepted boundaries. If this tale doesn't move audiences to tears, nothing will.” The movie stars Behrouz Vossoughi, Monica Bellucci, Yilmaz Erdogan, Belçim Bilgin, Caner Cindoruk, Arash Labaf and Ali Pourtash.
visit Ava Homa's profile
visit Ava Homa's website; www.avahoma.com
Posted by Unknown at 10:16 AM 1 comment: 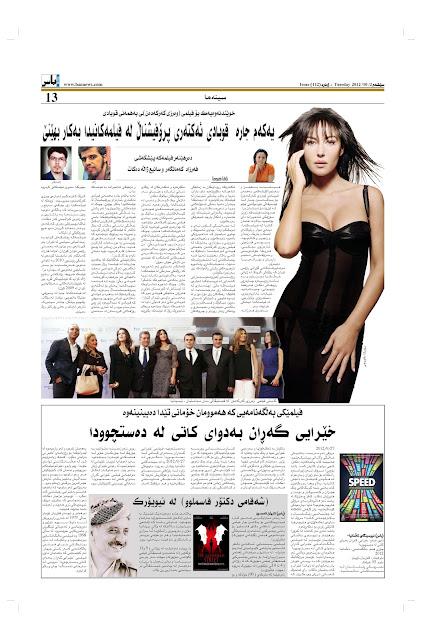 This is my review of Rhino Season directed by Bahman Ghobadi published in Kurdistan's Bas newspaper.
Posted by Unknown at 12:41 PM 26 comments: