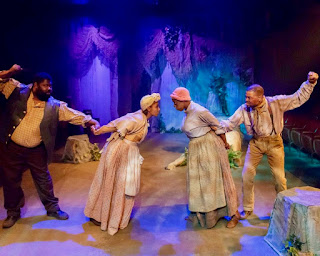 Photo by Michael Hardy
From left: Rayshawn Chism (NATE), Felicia Baxter-Simien (MERCY), Ebonie Marie (ALMA) and David P. Lewis (EZRA) in Long Beach Playhouse’s Flight
The captivating play Flight takes place on a plantation outside Georgia in 1858. Five-year-old Jim is separated from his mother when she is sold to a different family. She is being punished for reading to her son, defying the law that wanted the slaves to remain illiterate. Not knowing how else to cope with the trauma, the boy climbs a tree out in the woods and hides between the branches. How can the disempowered community help the stubborn boy who refuses to climb down the tree and help his devastated father who is ready to shed blood in revenge?
The healer Oh Beah, played by the talented Latonya Kitchen, uses the magical power of stories to transform and entertain the family and the rest of the community. The slaves are more than just victims. Their spines are bent under the boots of oppression, but human connections and art help the community to practice resilience. The law has broken up families and has banned reading and writing, but it can never take away the stories from them.
This form of resistance is not unique to slaves. In fact, before Prozac, communal storytelling was a major cure for depression. Like blacks, we stateless Kurds– whose land is divided between Turkey, Iran, Syria, and Iraq– have relied on oral storytelling, music and dance to survive and resist tyranny. Archetypal stories that pass from one generation to the next illuminate conflict so true to humankind that they transcend time and space.
The story-within-a-story Flight, written by Charlayne Woodard, combines slave narratives and African and African-American folktales. The anecdotes, like life itself, include horror and beauty. They help the shocked father and son, as well as the rest of the community members who have suffered from similar events, to understand that life on this planet the way we know it contains both light and dark, pain and joy.
Sets and props are simple and subtle in this no-intermission 90-minute play.
Directed by Rovin Jay at Long Beach Playhouse, Flight does not rely solely on storytelling, mythology and good acting to attract the audience. The production applies dance, fog and haze, pulsing light effects, live drumming and singing to make Flight an experience that shakes up something inside the viewers.
Flight continues at Long Beach Playhouse, 5021 E. Anaheim St., through June 16, with shows Fridays and Saturdays at 8pm, Sundays at 2pm. Tickets are $14- $24. For tickets and information, call the box office at (562) 494-1014 or visit lbplayhouse.org.

The article originally appeared in the Signal Tribune.
Posted by Unknown at 4:08 PM 1 comment: Links to this post 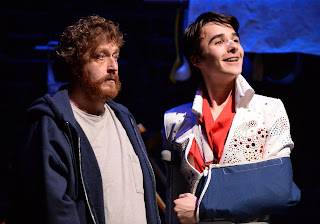 Deftly directed by Beth Lopes, California Repertory’s End Days is an intriguing and humorous dark comedy-drama that raises difficult questions about the ability– or lack thereof– to love someone whose ideology contradicts yours. Continuing through May 12, End Days sheds light on some of the challenges of living in a universe too complicated for the human mind to decipher.
Lifetime atheist Sylvia Stein’s (Jennifer Richardson) coping mechanism with post-9/11 chaos and terror is converting to Evangelism. Her husband Arthur (Chris Bange), who used to work at the Twin Towers and lost over 60 colleagues, is too exhausted from insomnia to eat or shower. Sixteen-year-old daughter Rachel (Tara Coffey) is a goth who hates that her mother has “shut off part of her brain.”
A quiet, black-haired Jesus (Charles Denton) is the companion and spring of joy for Sylvia, who is busy doing good in the world, knocking on doors advertising her religion and feeding the poor. The only barrier to her thorough happiness is that her family seems unsavable by Christ.
Elvis appears with his guitar. Long-winded and accidentally funny adolescent neighbor Nelson (Matt Avery), in the cultural icon’s costume, charms the conflicting characters and gradually becomes a catalyst for their communication. Neglected by his stepparents, Nelson is motivated by his love for Rachel, but she calls him a “God-whore” for embracing Judaism, Christianity and science at the same time.
Rachel, who accuses her mother of being delusional about allowing Jesus in her heart, has her own fantasy of meeting the renowned physicist Steven Hawking (ironically also played by Denton/Jesus). What the women have in common is that they lose sight of what’s before them in their quest for understanding what’s bigger than they are.
Now the Apocalypse is approaching. The four traumatized characters with conflicting world views have to spend long hours together in preparation. Who is going to save them, Hawking or Jesus? Which matters most: the small moments of sharing a meal with family or the philosophical debates around existential dilemmas?
The set and prompts are astoundingly simple. A handful of chairs and tables, a magnet-covered fridge, a guitar and a couple of lamps create the school and home setting. The cast members are comfortable and confident in their roles, facilitating the “willing suspension of disbelief.”
The play by Deborah Zoe Laufer examines how arch enemies science and religion have more in common than some would like to admit. They both fail to quench human thirst for knowledge.
Article originally published in Signal Tribune
Posted by Unknown at 4:41 AM 1 comment: Links to this post