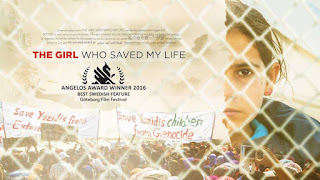 NEWPORT BEACH, United States (Kurdistan24) - There was a heavy silence in the theatre as the audience, drying tears with hands or napkins, left after watching a Kurdish documentary.
The Girl Who Saved My Life was a powerfully disturbing movie directed by the Duhok-born, Sweden-based, Hogir Hirori and screened as part of the Newport Beach Film Festival.
The movie follows Ezidis (Yazidis) whose homes were turned into dust and debris, whose loved ones were kidnapped and whose lives were turned into nightmares.
For no crime other than practicing their ancient religion, Ezidis were targeted for extinction by Islamic State (IS) marauders in August 2014.
In The Girl Who Saved My Life we meet a woman who gave birth while running uphill to flee the IS slaughter.
Unable to find anything else to cut the umbilical cord, she used a sharp stone.
While offering a brief glimpse into the agony that the displaced Ezidis have experienced, Hirori sheds light into his personal history whom countless of Kurds share: That of the Anfal genocide, the Kurdish uprisings, and the Kurdish exodus in 1991 when as an 11-year-old he was among nearly three million civilians who experienced week-long walks along the borders towards Turkey or Iran.
“I couldn’t tell my parents anymore that I was hungry or freezing or tired. I had to grow up and cope with the situation on my own,” Hiror reminisces in his film.
He knows what it’s like when childhood is stolen from kids. That is why he is haunted by the little girl who has lost her home and is curled in pain alone under the small shade of a red water tank.
The helpless girl inadvertently saves the director’s life, hence the title. But he loses her and spends months looking for her.
IS kills Ezidis because they are “infidels,” and promises to protect them as “brothers,” only if they convert to Islam.
“We call upon Ezidis to come down from the Shingal mountain before they starve. Admit that there is no God but God and Mohammad is his Messenger.”
As tempting as that offer might be to people who are starving and digging into the rough soil with their bare fingers to bury the children who lost their lives due to dehydration and hunger, the majority of Ezidis refuse to give in.
They accept their harsh fate and plead to their God to save them from the unimaginable hardship.
Both the victim and the victimizer call on God.
In this powerful documentary, we meet a lot of people, including a young girl who wants to be a doctor when she grows up and has done great at school. But now she has to give up on her dreams and take care of her four young siblings in a humid tent where the only protection from the mud are cardboards.
Nonetheless, Hirori proves that suffering is not the only currency of refugee camps. There is also love, hope, friendship, humanity.
And that is where his genius lies—in his ability to turn a painful documentary into some sort of drama that manages to end on a positive note. Hirori presents a strong closure to an upsetting movie.
The Girl Who Saved My Life won the Angelos Award for Best Swedish Feature in 2016 Göteborg film festival.

Posted by Unknown at 6:49 PM No comments:

Dr. Jaffer Sheyholislami, Linguistics professor at Carleton University in Ottawa, Canada, received the Faculty Graduate Mentoring Award on Tuesday.
Originally from Mahabad, Rojhalat (Iranian Kurdistan), the Associate Professor at the School of Linguistics and Language Studies was recognized by the university for his exceptional service as a supervisor and research mentor after being nominated for the award by his graduate students.
“I am honored. It’s a special award because graduate students nominated me. I find it extremely rewarding to work with curious students who enjoy exploring the 'place' of language in socio-cultural practices and social life in general, searching for appropriate theoretical frameworks and methodologies, and carrying out appropriate measures to collect data, analyze it and begin answering very important questions.”
The Kurdish professor was praised for his dedication to his students, approachability, use of storytelling to contextualize the topics he teaches and for the “unique ability to highlight abilities, interests and achievements students may not even know they have, making sure that each individual develops to their fullest potential,” wrote one of the students who nominated him.
“Dr. Sheyholislami has been the definitive guiding hand in my graduate career since I first arrived at Carleton. He has gone out of his way to encourage, mentor and motivate me,” wrote another graduate student.
“When I check my inbox in the morning, I so often find that Dr. Sheyholislami had sent me an email during the night….I found his dedication to his students to be unparalleled,” another graduate student explained.
Sheyholislami, a leading expert in Kurdish language, studied electrical engineering in Iran but also worked as a journalist before he decided to leave the country and continue his education in Canada and focus on subjects he felt passionate about unlike electrical engineering which he never completed. 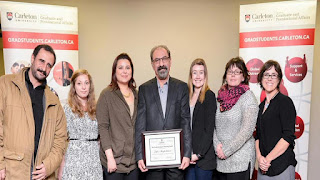 “I was almost sixteen years old when I discovered the Kurdish book, Mem-u-Zin, in Mamosta (teacher) Hemin’s home and before his family found out I was reading a banned book, I had already finished it and copied it as well. That started my fascination with Kurdish language and its literature,” Sheyholislami told K24 in a phone interview. The prominent literary figure Mamosta Hemin is Sheyholislami’s second cousin. Mem-u-Zin is the classic Kurdish love epic written by Ahmade Khani in 1692 and is considered one of the most important Kurdish stories.
Because Kurdish publications were banned in Iran in the 1970s, the young Sheyholislami had to turn to the black market to discover more Kurdish literature including Hemin’s first collection of poems, Tarik u Run (Dark and Light) which had been published in Bashur (Kurdistan Region of Iraq).
The author of Kurdish Identity, Discourse, and New Media (New York, Palgrave Macmillan, 2011) and numerous articles, Sheyholislami discovered his passion for linguistics as the science of studying language in Canada. He received a second Bachelor Degree in linguistics while working as an accredited Kurdish/English/Persian interpreter in the midPhD in Communication in 2008.
1990s, certificate in Teaching English as a Second Language (TESL) in 1999, an MA in applied linguistics in 2001, and his

Now at Carlton University, he teaches various courses in applied linguistics and discourse studies focusing on the ways discourse or language in use relate to society at large but more specifically to identity, power, and ideology.
“Language and discourse are indispensable parts of how we build relationships. I analyze how power relations work in discourse, how language is implicated in discourses of domination, how language is employed in the existence and perpetuation of social problems, and how our critical knowledge of language can be a part of the solution too. So, my students explore how bias, discrimination, and oppression are constructed linguistically and more generally semiotically in a wide variety of genres and institutional texts, for example in school textbooks, political discourses, news, and social media.”
Sheyholislami also works on Kurdish language policy and planning, language rights, and mother tongue education, and how the lack of education in mother tongue affects disparate societies.
In 2012, Sheyholislami spent his sabbatical at the University of Soran in Kurdistan Region of Iraq. “It was academically and emotionally satisfying. I connected with new and old colleagues, many wonderful students, and reconnected with my parents, who traveled from Iran to visit me in Bashur; I had not seen them in person for 27 years. I also got to live in an area surrounded by mountains symbolizing a typical Kurdish landscape I grew up with and which I had not seen for about three decades living in southern Ontario, Canada.”
Professor Sheyholislami is now working on several different projects. His short-term projects include writing a chapter on the representation of gender in the Kurdish proverbs, linguistic landscape in Richmond, British Columbia and the way Canadians view multilingualism in public settings, for example on stores signage.
Among his long-term projects are compiling a comprehensive Kurdish-English dictionary and building a linguistic corpus for Sorani Kurdish.
Posted by Unknown at 7:57 AM No comments: