Posted by Unknown at 9:12 AM No comments: 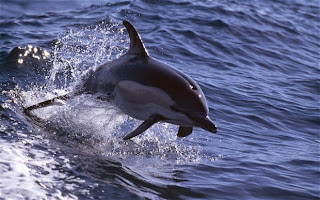 I wish you could see the dolphins today. It’s mostly the fins that I saw, with a bit of their body, but the ones I saw today were different from what I’d seen before.
Two dolphins were slowly cruising along the ocean, swimming so calmly as if it didn’t matter where the destination was and when they were supposed to arrive. In time, the two came up and dived down the water with such composure, such harmony, as if they were dancing to a rhythm only they could hear, as if it were their wedding and they were engaged in a tango and it didn’t matter that everyone was staring at them. ‘They are in love,’ I thought. ‘Of course it’s love. What else could make two creatures so synchronized, so peaceful, so delighted?’
“Have you ever seen anything like this?” asked a woman my age who had also been following the dolphins along the shore.
“I have not!” I said. “I usually see dolphins in a group and they swim much faster than this, farther from the shore and not that harmonized.”
“I think they were in labour and were going to have their babies somewhere, sometimes soon,” she said.
I laughed, surprised at her interpretation of the situation. “I thought they were in love and were savouring their moments together,” I said. Maybe they were reunited after having been apart for what must have felt as long as eternity for them.
“But we are only projecting of course.” I smiled and walked away, looked for the dolphins but couldn’t find the couples anymore. I only saw a single one quickly swimming away. ‘Go and find your love and don’t let her go!’ I wanted to scream after him.

My Interview with Australia's SBS Radio 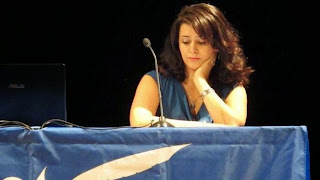 The interview is in Kurdish (Sorani), 13 minutes and done by Roza Garmian. The link is HERE

The below information is copied and pasted from their website:

In this discussion with Ms Homa we asked her about what she though about the events that developed as a result of Farinaz Khosrawani's death in the Kurdish city of Mahabad. Ms Homa wonders if the public reaction would have been the same if the perpetrator had not been a security office of the Islamic Republic and/or, Farinaz had still been alive?


Following the death of a young Kurdish woman, Farinaz Khosrawani, in the Kurdish city of Mahabad, many demonstrations were organised by the Kurdish people particularly in eastern Kurdish (Iran) and around the world to investigate her death.
It is alleged that she plunged to her death in order to escape sexual assault and/or rape by a security officer of the Islamic Republic of Iran, in the hotel she was working at.
Reportedly many people have been critically injured and dozens arrested by the IRI.
Posted by Unknown at 2:39 PM 1 comment:

What Is Worth Dying For?

Ava Homa
Ava Homa is a Kurdish-Canadian writer based in Toronto. She is the author of ‘Echoes from the Other Land’. Follow her on Twitter: @AvaHoma
Yet another woman lost her life to avoid becoming a victim of sexual assault. Last week Farinaz Khosrawani jumped to her death from the fourth floor of a hotel in Mahabad. Locals believe she escaped a sexual assault that was planned and supported by two men in power, the hotel owner and an army officer.
The question we should be asking is this: Why do we create a culture where a woman who is put in such a perilous position is led to believe death is her only option?
Instead, we seem to be so proud of Farinaz for having chosen “honour” over life. Our proud talks about her suicide unwittingly promotes the idea that every woman who has been raped would be better off dead.
Farinaz Khosrawani, regardless of what version of the story one believes, represents our homeland. Our nishtmaan, our identity, and our very existence has been abused by the oppressors for over a century.
Now that our homeland has been raped, should Kurds, as a group, die to regain “honour” or do we encourage resistance and empowerment?
It is true that Iran executes and imprisons women who defend themselves against rapists (Reyahneh Jabari and Mahabad Fatehi are some examples). It is also a fact that the Islamic Republic of Iran systematically suppresses Kurds and other ethnic groups and causes widespread poverty in the Kurdish region. If Farinaz had other job opportunities and didn’t need the job, if she were the owner of the hotel, if she were backed by the government, she would perhaps be alive today.
These are unchangeable facts, realities of life in Rojhalat. But there are realities we can and must change. Praising death and blaming the government will get Kurds nowhere.
The fact remains that Farinaz did not find her community supportive either. How would the community react, had Farinaz opened up about the assault later? How would we respond if more Kurdish women shared their traumatic sexual experiences? What if the rapist was not working for the Iranian army? What if the rapist was “one of us”?
Life is precious. Victims of sexual harassment and sexual assult need tremendous support to recover from the trauma they have been through. The last thing they need is an environment that praises death for a victim.
Farinaz lost her life but many of our women live today who relate to Farinaz on a much deeper and more personal level. We should reassure the ones who didn’t kill themselves that death is not the only option, that our community accepts, protects, and supports all the victims of sexual assault and sexual harassment regardless of their gender, sexual orientation, age, ethnicity, or class.
More importantly, we need to let the traumatized group know that we are on their side regardless of who the invader has been and how powerful he is.
There is no question that Iran is anti-women and anti-Kurds but rather than repeating these points over and over again, we must take a close look at our culture, dissect and remove some of the negative imprints that the government has left on our conscious and unconscious mind.
Kurdish community would be empowered once we stop praising death and instead create a strong supportive for the victims of sexual assault, letting them know that they are not alone, that death is not the option. Kas nale Kurd merdwa- Let No one Say that Kurds are Dead.

The article was originally published in BasNews
Posted by Unknown at 2:42 PM No comments:

The lullaby of legendary Farzad Kamangar

The lullaby of legendary Farzad Kamangar

Ava Homa/ Author; Lullaby
“I will eventually get out of here. The butterfly that flew away in the night told me my fortune,” Farzad Kamangar wrote in prison, shortly before the Iranian government made the decision to place a noose around his neck.
It was on May 10, 2010—Mother’s Day—that Farzad’s mother heard through the media that her son, who had been told he would be released, was killed.
“He had such a tender soul. He loved his students to pieces. Spring was his favorite season. He was born in spring,” his mother says in a video posted on YouTube. But tears stop her from continuing—from telling us that he was executed in his favorite season.
This man who loved spring and his students was charged with moharebeh (enmity with God and the state) and terrorism. It is true. Teaching young children their banned mother tongue terrorizes the Iranian oppressor.
Farzad Kamangar was tremendously popular, cherished by Kurds and non-Kurds, young and old, men and women. The love others had for him was, ironically, what convinced the authorities to execute him despite his obvious innocence. Popularity terrorizes dictators, who are nourished by hostility and antipathy in their nation.
How did Farzad move so many people? Was it something in his voice, spreading across the internet and making him one of the most influential Iranian figures of 2010? Did he hypnotize us with his poems? His letters?
Farzad Kamangar couldn’t stop his torturers from breaking his chin and teeth, but he was able to maintain the life within him through imagination and literature. “I won’t let them kill me inside,” was his goal—and he reached it.
In one of his letters—­which are still available on the internet—he describes being transported to Sanandaj Prison, Kurdistan. He paints a vivid picture of Kurdistan in the autumn for us through his view—not only from the window of the plane, but also through the window of his imagination. He writes little about his anguish, but instead about his moments of falling in love while listening to the music of legendary singer Abbas Kamandy and of hiking the Awyar Mountain. He is distracted from these memories only when the bitterness of the blood he accidentally swallows threatens to suffocate him.
The prison guard who anxiously checks that Farzad has survived a severe beating doesn’t know, cannot know, that Farzad, in his mind, is dancing at his wedding, waving his chopi—his handkerchief—in the air and shouting, “Cheers! Cheers to all the prisoners’ mothers who are awaiting reunion with their children. Cheers to all the men and women who lost their lives for their ideals.”
That is what has made Farzad Kamangar a legend. He is one of the few people on the planet—like Nelson Mandela, like Leila Zana—who was not broken under torture.

Farzad Kamangar / Illustration: Tamar Levi
Farzad Kamangar was a teacher devoted to improving the life of village children. He was all too familiar with suffering, both directly in his own life and indirectly through others’ experiences. Farzad knew the pain of Kurds, the pain of ethnocide and linguicide. He was familiar with the widespread poverty in Kurdistan resulting from politicization of the region, with the abuse and violence suffered by women because of the government’s gender policies. For Farzad, the hurt wasn’t just the physical torture he endured—it was the pain of his nation.
His voice, his imagination, his words, his ability to touch the agony of others made Farzad Kamangar an icon representing all political prisoners who have been executed at the hands of the Iranian government. He was and still is a strong inspiration. He continues to live in the heart of all those who admire him. His voice continues to be heard not only through his own writing, but also in the poems and stories he inspired.
Novel Rights has published a short story inspired by Farzad Kamangar’s letters from prison: “Lullaby” offers a glimpse of his powerful reality.
By Buying “Lullaby” Novel Rights ePUB Short Stroy written by Ava Homa, You will help us to create more HRL (Human Rights Literature) short stories and produce many more events around the globe promoting literature that supports human rights values.
- See more at: http://www.novelrights.org/2015/05/08/the-lullaby-of-legendary-farzad-kamangar/#sthash.5JJnpCDF.Q9tiEPnA.dpuf
Posted by Unknown at 1:27 PM No comments: