Author Roya Hakakian has achieved a remarkable feat: She has written a book about the 1992 assassination of Kurdish leader Sadegh Sharafkandi at a Berlin restaurant, and the four-year trial that followed, without ever really acknowledging the Kurds as a people.
Except the inevitable assassination scene, Kurds are nearly wholly absent fromAssassins of the Turquoise Palace, which otherwise offers a compelling read, with vivid imageries and masterful maneuvering among the different characters and perspectives.
In the 301-page hardback version, what is written about the Kurds barely constitutes three pages, skipping over the identity, painful history and struggle of a scattered people who number an estimated 30 million, and are the world’s largest state-less ethnicity.
The brazen murder of Sharafkandi and his two deputies at Berlin’s Mykonosrestaurant on September 17, 1992, shocked Kurds around the world and made international headlines.
Sharafkandi was the leader of the Kurdistan Democratic Party of Iran, fighting for greater rights for Iran’s oppressed Kurds.
In an April 1997 ruling, after naming the principal perpetrators and accessories, the German court issued an international arrest warrant for Iranian intelligence minister Ali Fallahian, declaring that the assassinations had been ordered by him, with knowledge of Iran’s top leadership, including Supreme Leader Ayatollah Ali Khamenei.
Hakakian, an Iranian-born poet, journalist and author who is based in the United States, writes in such detail that the reader even knows the dreams of Sara Dehkordi, the daughter of a non-Kurd victim.  The detail permeates even to the Iranian dish cooked by Parviz Dastmalchi, a survivor.
And yet, no Kurd is heard in court, even as a witness during the four years of trial that presented more than 300 testimonies.
What little information about the Kurds is contained in the book, which was named a New York Times notable book for 2011, is inaccurate and insolently trivializes the Kurdish cause.
Hakakian calls the Kurds, “only a minority of four millions,” threatening Iranian rule over a total population of more than 60 million. “Compared to the Kurds elsewhere, Iranian Kurds had always led far better lives,” Hakakian writes.   She informs of “an ancient history of camaraderie among the Iranians and the Kurds!”
Is this the extent of this eminent writer and journalist’s knowledge of the Kurds?  Years of  systematic oppression against the Kurds is denied, and it is claimed that a brotherhood has existed among Kurds and Persians.
German officer Bruno Jost rightfully wonders why on earth Tehran wages war on such an insignificant minority that Iranians have been friendly to. Hakakian’s brilliant answer:  “Since the Gulf War, the Kurds were no longer alone. They were a minority backed by America whose influence threatened to deepen and spread among the neighboring Kurds.”
That is how Hakakian reductively recounts the painful history of the Kurds.
Based on the book, Sharafkandi and his deputies have no one to file a complaint on their behalf against the assassins.   Sharafkandi is referred to as this “unpopular, uncharismatic Kurd” who  – in the few sentences he utters throughout the book – says that Kurds are more Iranian than the rest of  Iran.
Jalal Talabani, one of the first witnesses and a prominent Kurdish leader, is the one who revealed Tehran’s hand in the assassinations at the primary stages of the case. Yet, he only takes up a paragraph of the book, and is ignored until the end, when he is quoted as a major contributor to the case.  The reader never learns who Talabani is, that for decades he has been a towering figure of the Kurdish struggle.
When, after four years, the trial judge finally admits “the plight of the Kurds,” nothing but that brief phrase is reported or explained.  The reader, who earlier in the book is informed about the existing amity between Kurd and Iranian, is left wondering which “plight” the judge is referring to.
The Kurds, thankfully, appear at Sharafkandi’s funeral. But there, they behave in a way that no Kurd would recognize. They freak out everyone, especially the guards, by suddenly and spontaneously breaking out into a “Halparke”  folk dance, while singing "Ay Raqib."
How many Kurds dance when singing their national anthem? 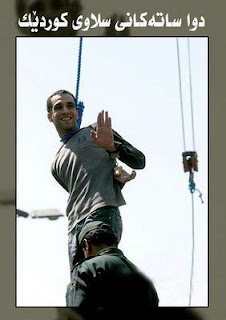