The Mind and Times of Virginia Woolf (Part 1 of 3)

Posted by Unknown at 10:20 AM No comments: Links to this post

The Mind and Times of Virginia Woolf (Part 3 of 3)

Posted by Unknown at 10:09 AM No comments: Links to this post

The Mind and Times of Virginia Woolf (Part 2 of 3)

Posted by Unknown at 10:08 AM No comments: Links to this post

Posted by Unknown at 4:40 PM No comments: Links to this post

Ava Homa was not so long ago writing and teaching at a university in Iran when she decided to move to Canada to study Creative Writing at the University of Windsor. She now lives in Toronto, where she continues to teach and write. Her debut collection of short stories Echoes From The Other Land (Tsar Publications, 2010) has been critically acclaimed and nominated for the prestigious Frank O’Connor Short Story Prize. She has been regaled as Canada’s answer to Raymond Carver, and rightly so. Her stories are incredibly succinct and breathtaking. Homa exquisitely portrays the lives of her female Iranian protagonists, who continually prove to be unafraid of taking hold of their own lives, unveiling an inner-strength that is not only surprising, but a lot more universal than might have been first expected. Her stories are rich, dramatic, tension-filled, and have an innate ability to captivate the reader.

Homa poignantly points out that the resistance is real, that Iranian women are indeed tired of living their lives under an oppressive regime, and that the Western media’s depiction of them as being inferior and limited are primarily falsehoods. It should also be noted that the similarities between Middle Eastern and Western culture are not that dissimilar at all, that Iranian women do have a voice, and their social activity is not only widespread and diverse, but ever- changing. 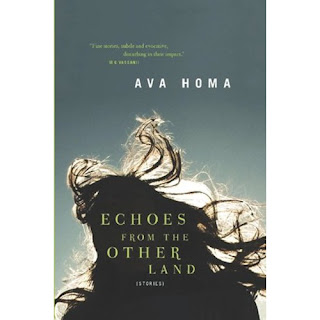 Posted by Unknown at 4:14 PM No comments: Links to this post

Written on September 14, 2011 by Editor in Culture, History, Iran, Kurdistan

By Ava Homa:
Carol Prunhuber’s book, Passion and Death of Rahman the Kurd, is more than a biography; it offers a deep insight into a nation and an ethnic group’s history.  Poignant and intelligent, this engaging book focuses on the inspiring life of one of the most influential Kurdish political leaders, General Secretary of Kurdistan Democratic Party of Iran (KDPI), Dr. Abdurahman Ghassemlou. He fought for “Democracy for Iran, autonomy for Kurdistan” for years and in 1989 was assassinated by the Islamic Republic agents while negotiating Kurdistan’s situation. The book offers much to a spectrum of readers, from those who have been part of Kurdish resistance to those who don’t know much about Kurdish cause.
Prunhuber has skilfully captured all the intricacies and complexities of this leader’s life and resistance. Ghassemlou was a politician who remained a humanitarian, a guerrilla who opposed acts of terrorism, a progressive thinker, a Muslim who believed in the separation of religion and State, much ahead of his time and region. By putting Dr. Ghassemlou’s life in its proper historical and social context, Prunhuber is able to explain the contradictions and compelling facts and details.
Drawing on extensive resources, books, articles, newspapers, interviews with Ghassemlou, his family, friends and people who were in contact with Dr. Ghassemlou, Prunhuber has proven an ability to grasp various aspects of this leader’s life who was a beloved of Kurds. Ghassemlou was a democrat who was pro women’s rights. Prunhuber not only points out the fighting methods of KDPI but also explains how Dr. Ghassemlou would treat the Peshmarga:
“Ghassemlou would hold their hands; he knew their names, about their lives. He spoke to them about their village and their family. Ghassemlou had such an incredible human quality that he would listen to each and every one of the stories of the peshmarga’s.”
Prunhuber pictures the Peshmarga’s love and respect for Ghassemlou and does not miss details such as the differences between Talabani Peshmarga and KDPI Peshmarga. She quotes a French doctor who commented:
“The democrats, the KDPI, were miserably outfitted compared with the Talabanists. ‘They were very poor. They used sneakers and kept bread and cheese inside their shirts. They froze out in the field. They had cloth made of nylon. On the other hand, Talabani’s men used cotton cloth. The Talabanists had Coke and cookies in the hospital; the democrats only had bread and goat cheese.’” (104)
What makes Prunhuber’s book powerful is the way she understands Iran’s Islamic Revolution and Kurdish history which is simultaneously part of and distinct from Iran’s situation.
Ghassemlou is a significant part of Kurdish history, a charismatic leader who spoke nine languages and had an appealing sense of humour. He was a man who stayed democrat even when this quality worked against him. Although terrified of dying in Europe, Ghassemlou’s death was a statement. He died while having a dialogue with one of the most despotic regimes of the world, Islamic Republic of Iran. Prunhuber, however, does not end the book by this leader’s assassination. She offers details of his murder and the party’s destiny after Ghassemlou’s death. Prunhuber, in addition, bravely points out the fact that Austria never resolved the murder’s case in return for arm exchanges with Islamic Republic of Iran. “Ghassemlou’s widow, Helene pursued the case for many years,” Prunhuber writes.
A great read from this excellent writer. Strongly Recommended.
Ava Homa, a Kurdish-Canadian writer is author of Echoes from the Other Land  which was nominated for the the world’s largest short story award Frank O’Connor International Short Story Award. Ava has two Masters’ degrees: one in English and Creative Writing, another in English Language and Literature. Echoes from the Other Land has a running theme of resistance by modern Kurdish women.  The stories are told on a universal scale, depicting human endurance, desire and passion. Ava’s writings have appeared  in the Windsor Review and the Toronto Star.  She was a writer in Iran, and university faculty member. In Toronto, Ava writes and teaches Creative Writing and English in George Brown College. For more information please visit www.AvaHoma.com
Posted by Unknown at 8:10 AM No comments: Links to this post